A waitress in Tennessee was brought to tears this week when a customer left her a generous tip and a moving message. Claire Hudson, 25, was serving tables at Mac’s Grub Shak in Spring Hill on Sunday when a “very sweet couple” sat down and ordered beers, a burger, and hot dogs. It was only after they left that a cashier pointed out the $36 tip the man had left on his $28.12 bill, along with a note on the back. “I didn’t know what to say,” Hudson tells ABC News. “I was in tears when I read it.” It read: “Today is my brother’s b-day. He would have been 36 today. Every year I go eat his favorite meal (hot dogs) and tip the waitress his age. Happy B-day Wes.” “It’s the best tip I’ve ever gotten,” Hudson says, “not because of the money, but because of the meaning.”

Hudson posted a photo of the bill on Reddit after she finished up her shift that night. “When I woke up I was on the front page,” she says. “It had over 1.5 million views on Imgur and 350,000 upvotes on Reddit.” Hudson and the owner of Mac’s Grub Shak now want to honor the man that inspired the generous gratuity. They hope to track down the tipper to find out exactly what Wes liked on his hot dogs so the eatery can “name a hot dog after him.” Hudson adds she may start a similar tradition herself. “My best friend, he died about three years ago. This experience has definitely given me the idea to do the same thing on his birthday every year,” she says. “It was deeply moving and just the coolest thing that’s ever happened.” (This waitress got a big tip just when she really needed it.) 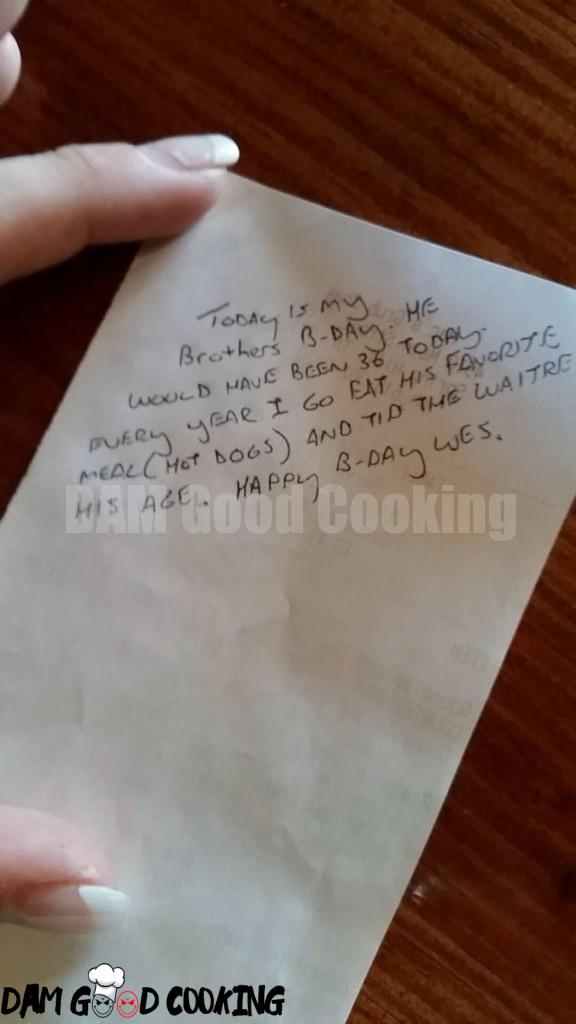 Written By
Dave B
More from Dave B
If You Can’t Stand The Heat – Get Out The Kitchen!!...
Read More