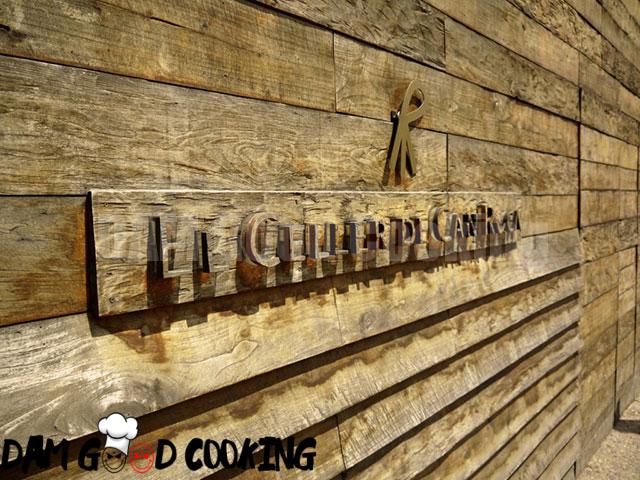 Spanish restaurant El Celler de Can Roca regained its title as the world’s best restaurant on Monday, fending off previous winner Noma. But what makes Can Roca so special? Seldom does one establishment have such a recipe for success where each brother has excelled in their own field starting with Joan’s culinary direction as the executive chef, Josep’s impeccable choice and collection of wine as the sommelier and Jordi’s creativity as the pastry chef that is as whacky as Willy Wonka. Separately, they produce brilliance. What they bring together as a team is a gastronomic experience that is difficult to match. 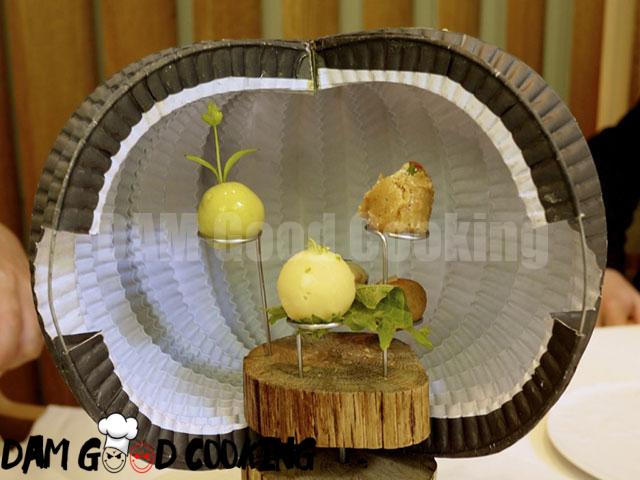 The World, according to Joan Roca’s latest travels, was expressed through various bite-size morsels presented in a paper lantern representing the earth. The waiter proceeded by opening up the globe to reveal the contents. If there was one thing Can Roca does well it is their playful presentation. Creativity is not something that is lacking here. 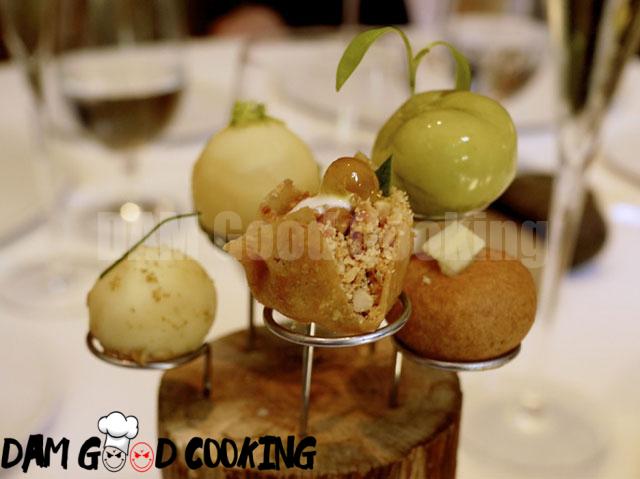 A guacamole and grapfruit sphere represented Mexico, a liquid spherified ceviche ball for Peru(which came with a warning to have in one bite), hummus for Lebanon, honey and crumbled almonds for Morocco and kimchi for South Korea. They were good fun with distinct flavours depicting the countries from which Joan had been inspired. He even makes his own kimchi now. Impressive! 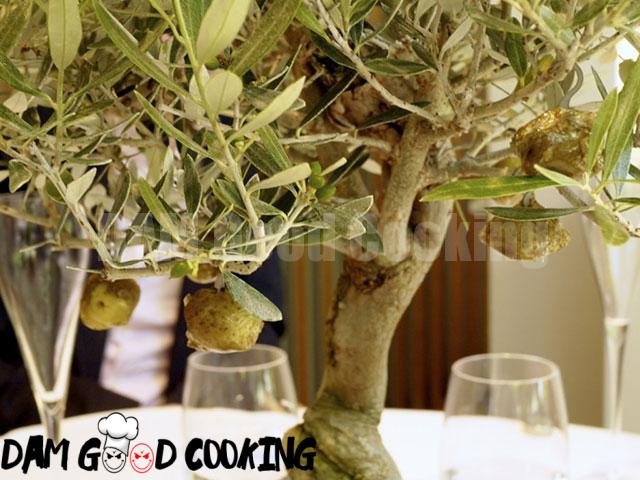 The Can Roca classic of the Caramelised Olives then made its appearance. A miniature olive tree was served like a bonzai in a pot. At closer inspection you could find green olives stuffed with anchovies with a caramelised coating hanging amongst its leaves. Sweet, brittle, sticky, juicy – all the sensations from each olive that was dangling off the branches. Sensational. 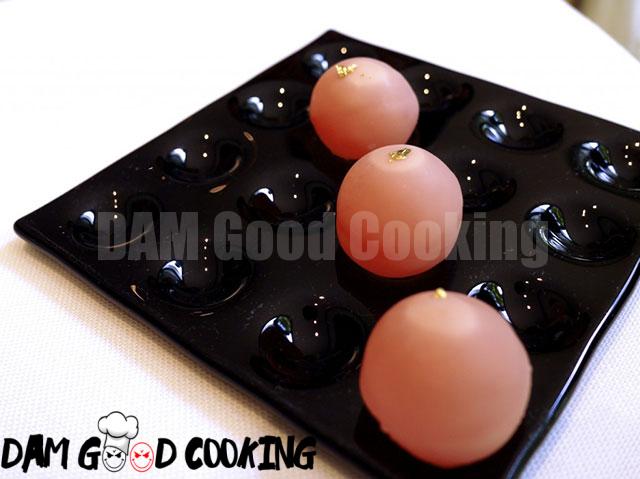 More amuse bouche followed with the Campari and grapefruit bonbon. This was a perfectly thin brittle cocoa butter sphere encasing a liquid mixture of the elegant bitters. A word of caution though, please eat this in one go. 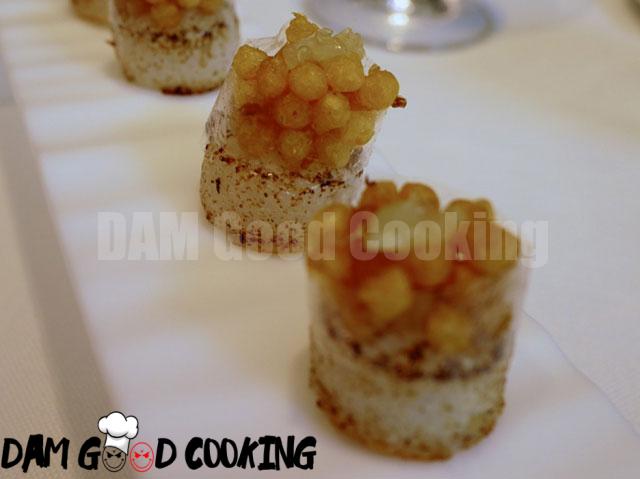 Next was Joan Roca’s play on a Spanish classic of Calamares a la Romana. A welcome adaptation! The squid had been mashed up and reshaped into a thick circular disc and blow-torched before being topped with crispy balls of batter drenched with lemon juice. A finely balanced dish with a very intense flavour of squid and deliciously contrasting textures. 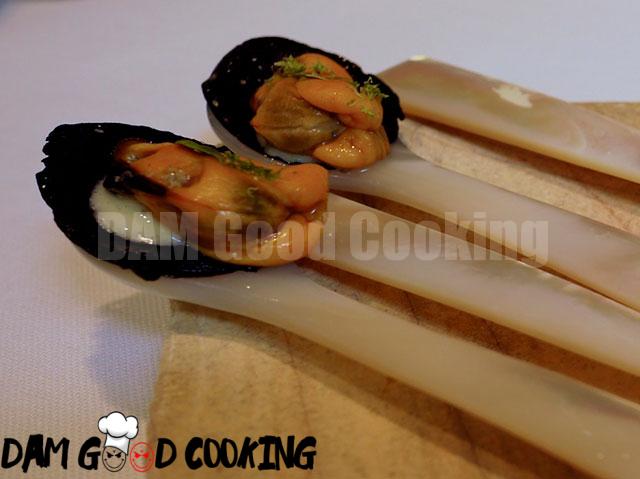 Marinated mussels in a ceviche sauce served on long mother of pearl spoons. A soft juicy mussel with a citrus note. This was quite a bit more simple than the other amuse bouche and perhaps my least favourite. 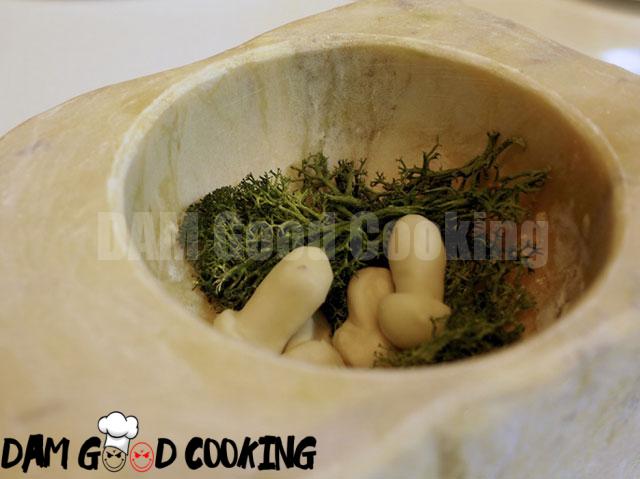 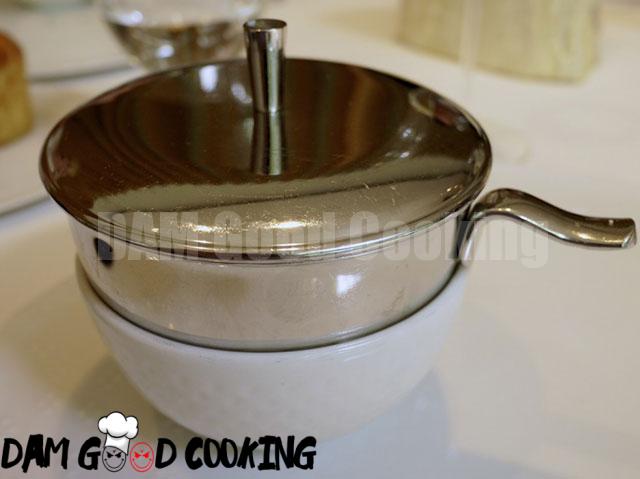 A bowl with a metal lid was then presented to each of us. Our waiter proceeded by lifting the lid to reveal… 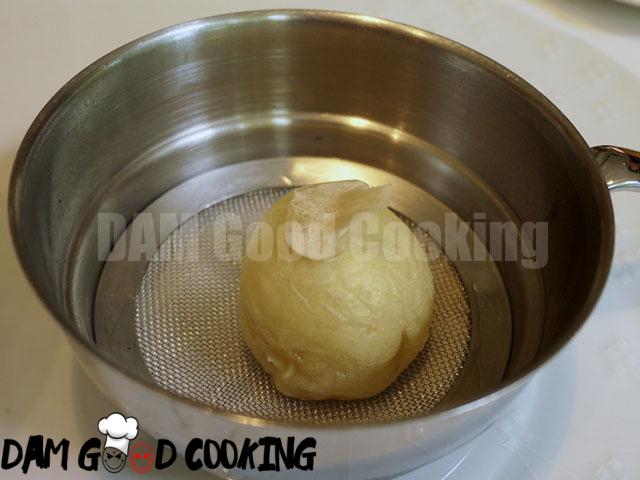 … a St George’s mushroom brioche and a separate escudella (Catalan broth / stew) underneath in a bowl. We were advised to dunk the brioche into the broth before eating it.

Perhaps it was the choice of mushroom but I felt, for the amount of preparation that went into the mushroom, the intensity of the flavour was not at the level I expected. Some white truffle could have excited my olfactory senses better perhaps? 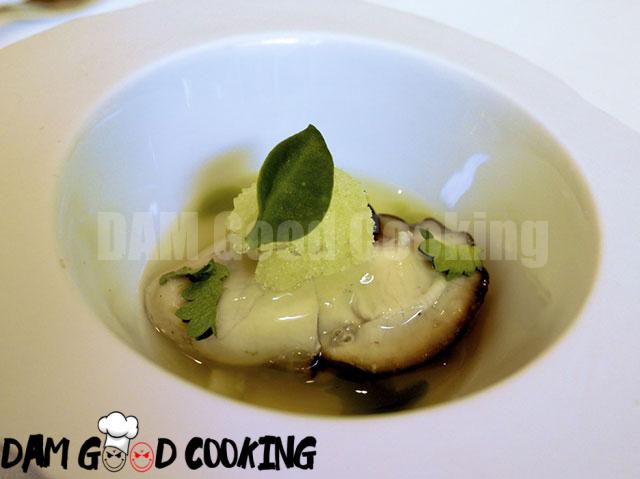 On to our first course of the day with the Oyster with black pearl served in its own juice with melon juice, dots of cucumber, celery, apple, lime jelly, wood sorrel, melon flower and heartleaf iceplant. Whilst I consider myself to be a purist when it comes to the matter of oysters, I was pleasantly surprised as to how all the component worked here without distracting from the essence of the oyster. It was an elegant and finely balanced dish that could have easily gone wrong, but it didn’t. 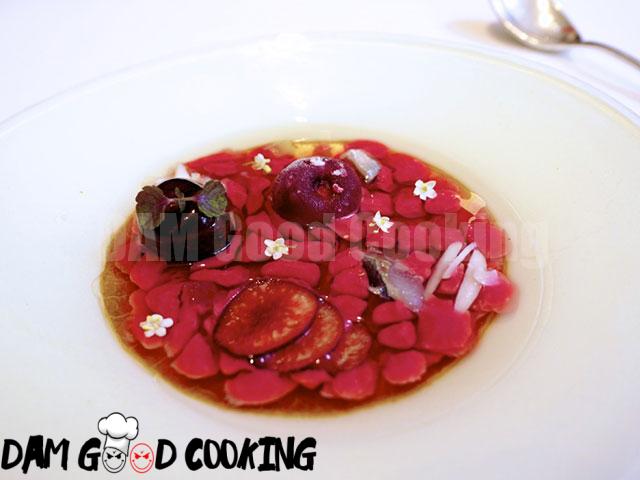 A beautiful dish then appeared before us which required a double-take. A dessert dish already? No, of course not, I was mistaken. It was instead Elderflower infusion, cherries with amaretto, gingered cherries and smoked sardine. Of course, how could I have mistaken? I wasn’t sure what to expect here as elderflower infusion, cherries and sardine sounded like a recipe for disaster. However, it was surprisingly memorable…. but for positive reasons. The smoked sardines transformed the dish from what could have been a dessert course into unique savoury dish. Floral, fruity and light – the elderflower infusion effectively removing the fishiness of the silky sardine leaving only the delicate flavour of the fish. 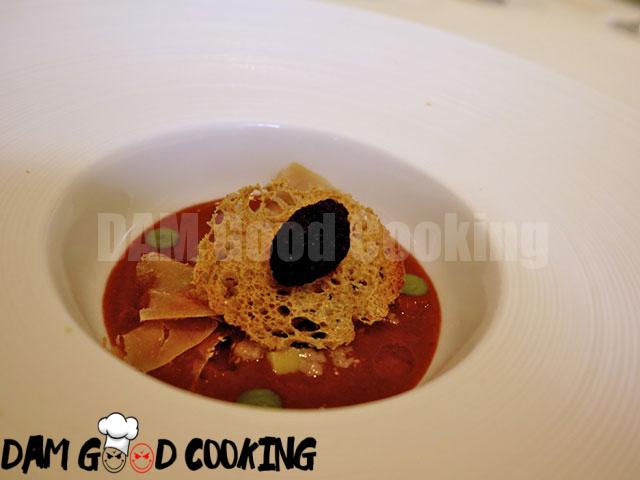 The next course was a celebration of the local staple, olives. A modern take on a classic with theBlack olive gazpacho. This involved a spicy gordal olive mousse, black olive fritter, ice cream made from manzanilla and olives, toasted bread with oil, fennel jelly, winter savory jelly and picual olive. I was amazed to be able to distinctly pick out each flavour of the variety of olives. From the sweet black olive gazpacho to the contrasting bitter and salty gordal olive mousse and slices of picual olives. We needed more bread to mop this beauty up. 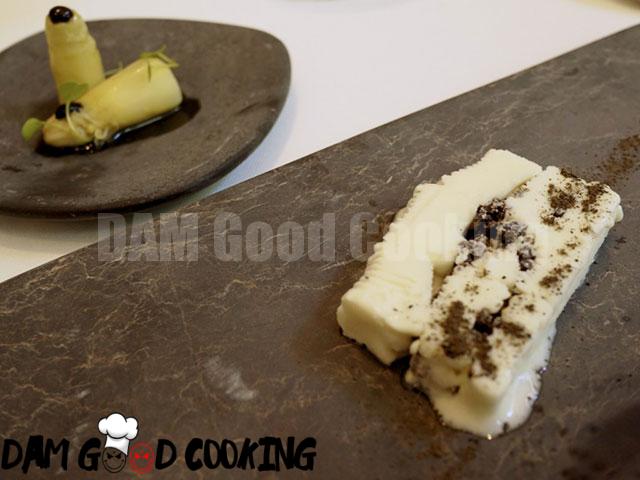 Another savoury dish appeared again mimicking a classic dessert (also known as Viennetta for the non-Spanish), the White asparagus comtessa and black truffle powder. I thought the white asparagus on the side was unnecessary but it did allow me to greater appreciate the intensity of the creamy and velvety ice cream which was full of asparagus flavour such as I had never tasted before. The icing on the cake, literally and figuratively, was that earthy black truffle powder. If only Vienetta came in this flavour… 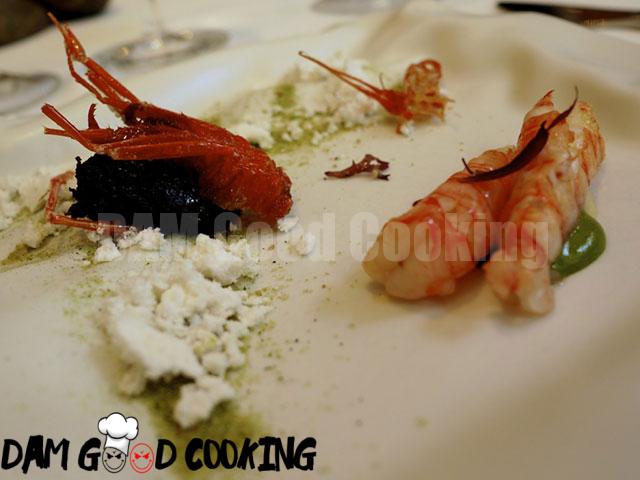 Joan Roca made sure to make full use of the King prawn (I am often frustrated when other establishments have failed to serve the whole crustacean) served charcoal grilled with king prawn sand, ink rocks, fried legs, head juice and king prawn essence. Admittedly, this did not come anywhere near the prawns I had at Asador Etxebarri but I did enjoy the extremely intense and rich essence made from the brain and the smokey flesh of the prawn. My favourite bit, however, was the crispy fried head and legs. Crunchy. 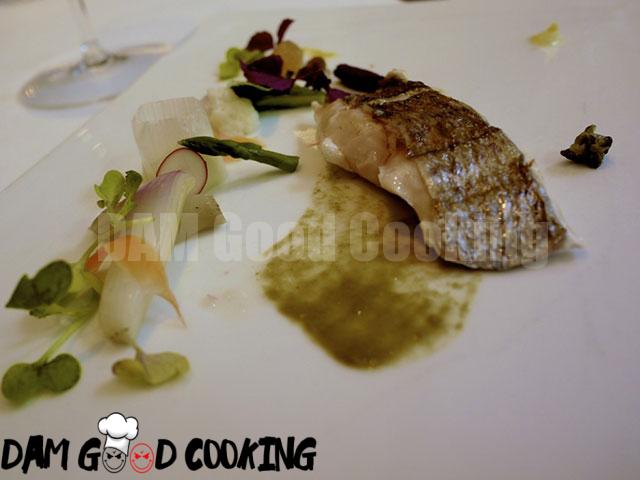 A slightly smoked fillet of Red sea bream, yuzu, capers and crunchy pickled vegetables was next. This was a nicely cooked piece of fish, tender and moist but nothing extraordinary and perhaps slightly disappointing when compared against the other dishes. 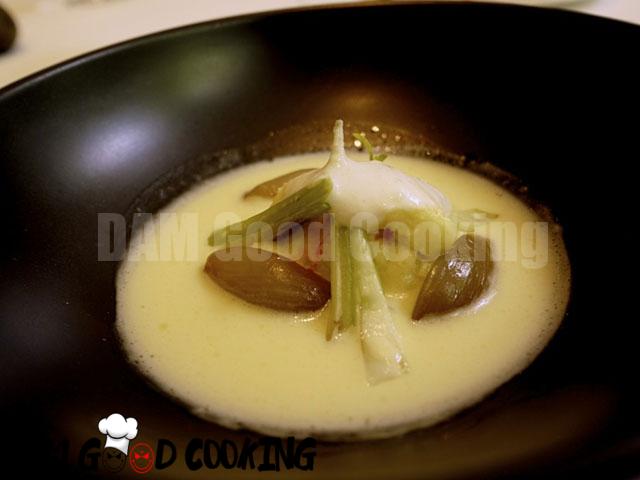 A much stronger fish course was the Salty cod brandade with salt cod tripe, salt cod foam, olive oil soup, shallots, honey, thyme and chilli pepper. Great interplay of flavours from the creamy and salty brandade balanced against the sweet honey and slightly citrusy thyme. The slight kick from the red chilli was again spot on. Despite the strong flavours, it was a surprisingly light dish. 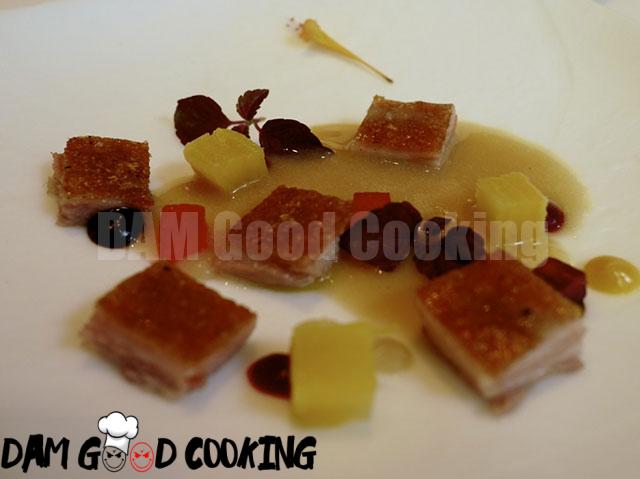 Whilst there had been no disaster courses, I felt there had been a lackluster performance in the main segment of the meal compared to the amuse bouches. That was however rectified with the tender and suckling Iberian suckling pig blanquette that had been cooked at 63°C over 30 hours, retaining a beautifully crispy crackling coating. Joan Roca went further to match his take on the cochinillo (suckling pig) with a deconstructed aroma of riesling wine using sweet mango terrine, melon, beetroot, beetroot purée, black garlic, onion and slightly tart orange concentrate. This was much more like it. Clever piece of cooking indeed. 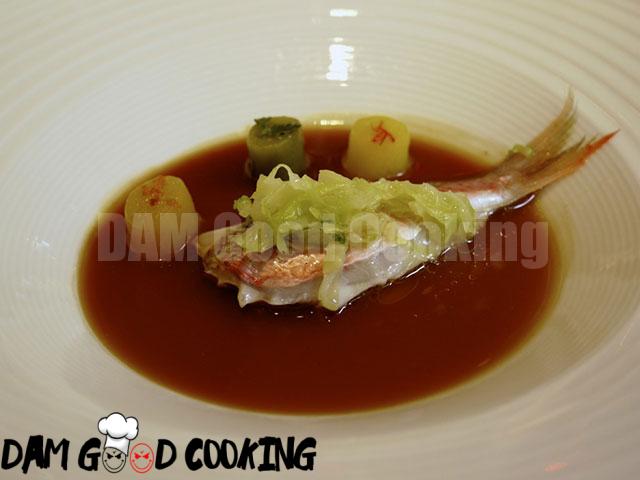 Next was a minimalist interpretation of the traditional Catalan fishermen’s soup (Suquet); essentially Red mullet cooked sous-vide at a low temperature, served on top of a concentrated fish soup with shredded cabbage and three towers of purée; orange, fennel and saffron. The depth of the fish soup was remarkable and the fish was unbelievably flavoursome. Personally I still prefered the traditional rustic soup but this wasn’t bad. 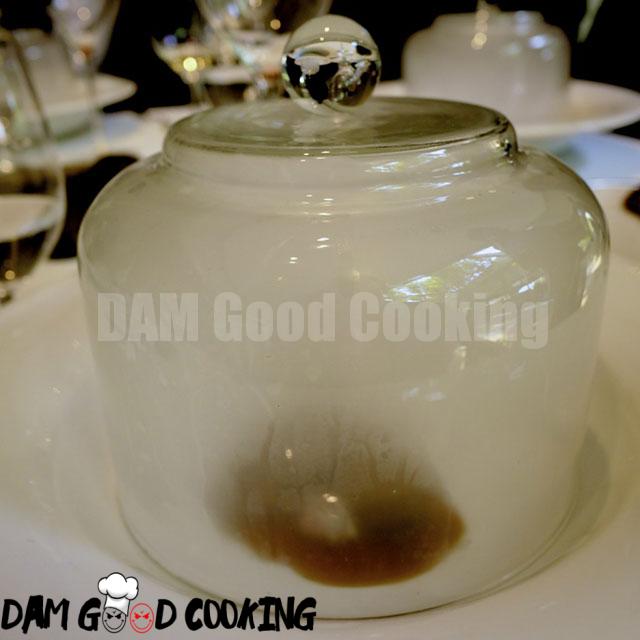 A glass cloche filled with smoke was then presented to us. The waiter then proceeded by revealing what laid hidden underneath… 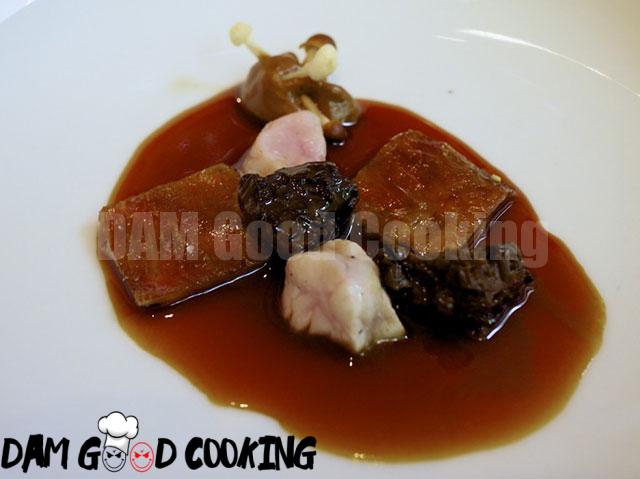 … which was a smokey Charcoal grilled lamb breast fillet and sweetbreads with spring mushrooms.  Tender piece of lamb, crispy skin and silky sweetbread, served over a concentrated lamb jus which had also been soaked up by some of the earthy morel mushrooms. I wondered what they had done with the rest of the lamb because I wanted more. 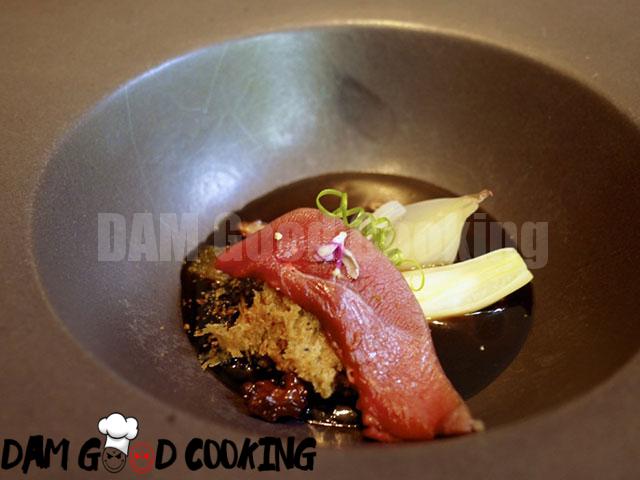 The finale of the savoury segment was a rather brave dish of Pigeon liver and onion, curry-caramelised walnuts, juniper, orange peel and herbs. I absolutely loved the marriage of flavours between the rich gamey pigeon liver mousse, the curry and walnut caramel layer and the classic orange. A sliver of pigeon liver was also served pink but that didn’t phase me. This was a solid dish which also appeared on my first visit and I could see why. Earthy, gamey, rich and intense. I could however appreciate that if game and liver was not your thing then you would have been less enthused. 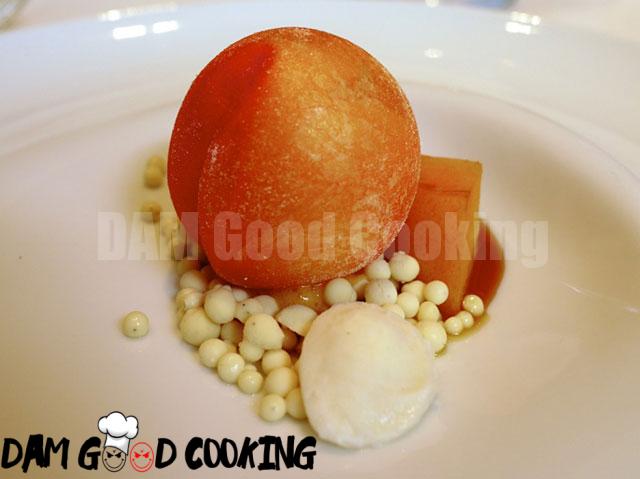 On to the dessert and the best course of the evening. The Caramelised apricot: blown sugar apricot with vanilla and caramelised apricot cream was not only a work of art but divine. Visually this is one of the best dishes I have encountered with unbelievable craftsmanship. The sugar work was filled with an apricot foam and presented on a bed of vanilla. The intensity of the apricot flavour was unbelievable and stood out next to the slice of fresh apricot. It was one hell of a dessert particulalry considering I was not the biggest apricot fan… until that day. 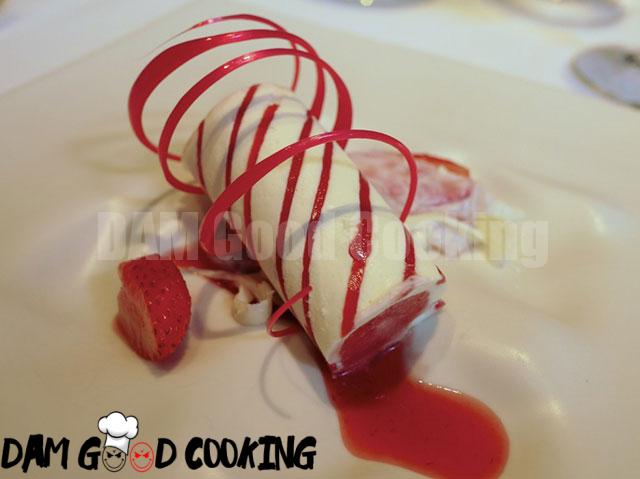 Another modern interpretation by Jordi Roca with Strawberries and cream which was perhaps the weakest dessert dish. It was essentially just a rod of strawberry sorbet, wrapped in a cylinder of cream and more strawberry sorbet, ringed by a spiral of delicate sugar work. Mind you, fresas con nata (strawberry with cream) is a very popular dish in Spain so perhaps the significance may have been slightly lost on some. 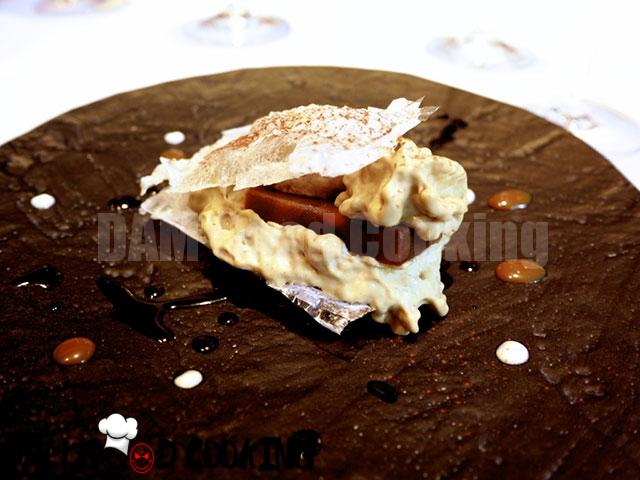 Our final dessert dish was a Mocha mille-feuille, anise mille-feuille with mocha foam and coffee granita. A comforting dish with a lovely contrast of texture, between the gooey mocha and brittle sugar sheets, and flavour, between the sweet foam and bitter coffee granita. It was however the not the most visually appealing dessert, resembling perhaps closer to a half chewed snicker bar. Looks can be deceiving, indeed. 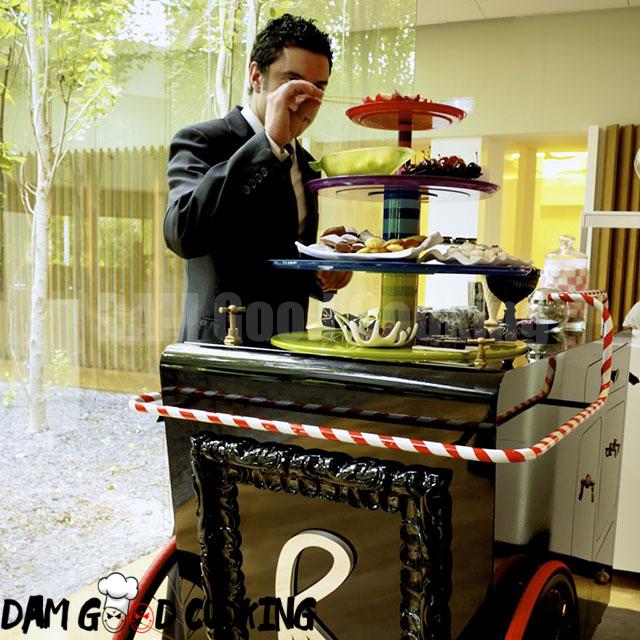 n addition to the dining room was the Sweets trolley designed by local artist Andreu Carulla (who also designed the lantern from the amuse bouche, equipments in Rocambolesc and many other tableware at Can Roca). The trolley was filled with macarons, chocolates, fruit jellies and other sweets. To be honest, I was too full by this point. 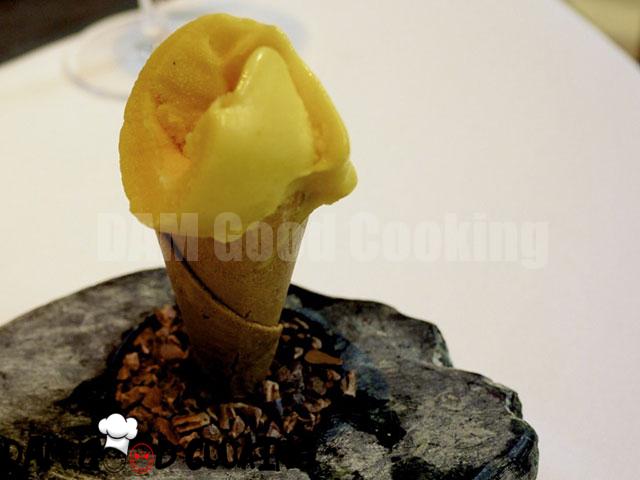 Written By
Dave B
More from Dave B
Have a need for drama? Sick of doing kitchen prep and...
Read More